Fatmata: Climbing the hills of her own future in Sierra Leone 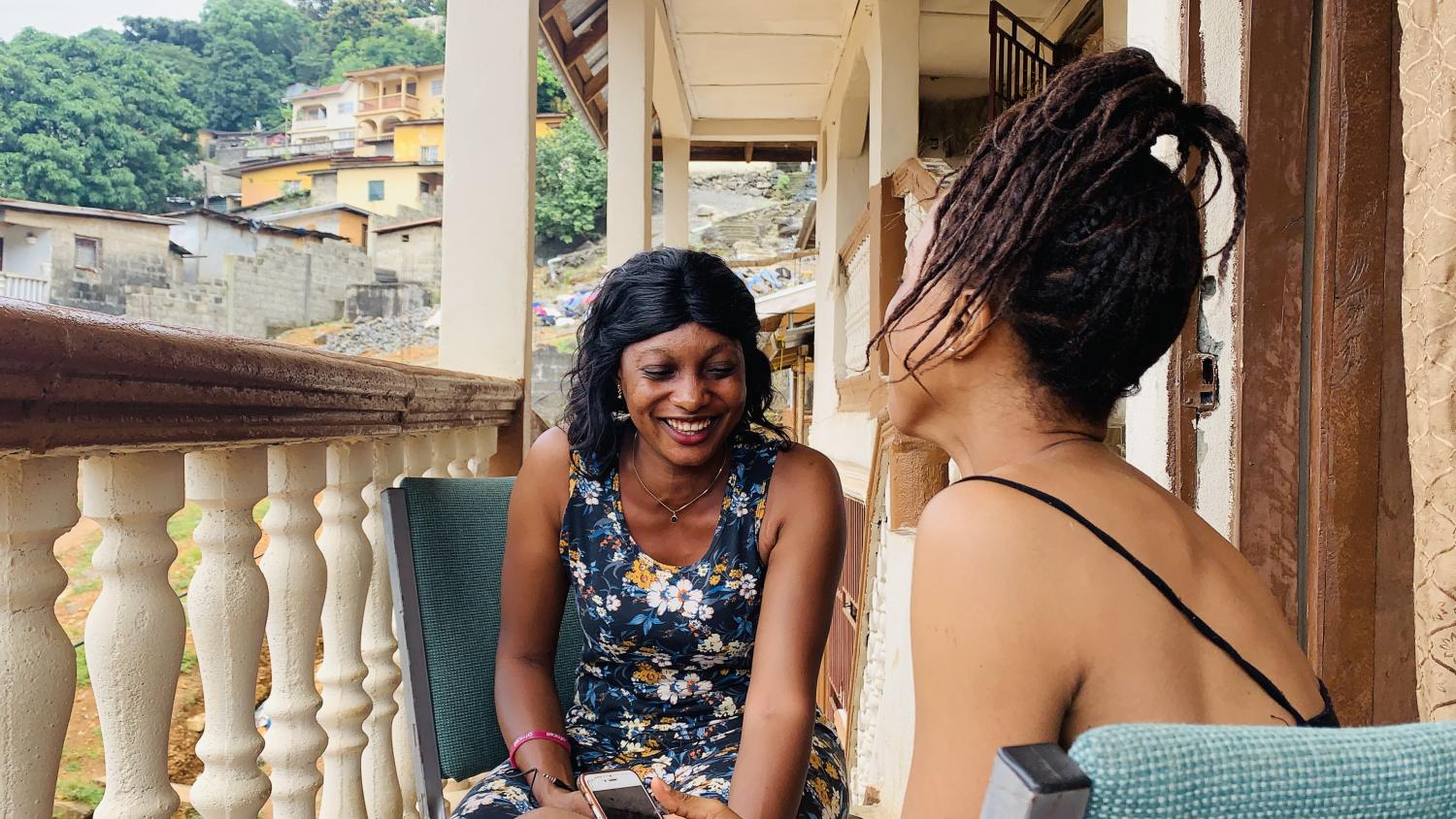 With hopes of finding better jobs and better life, many Sierra Leoneans and other migrants from Sub-Sahara Africa were recruited or trafficked to the Gulf States of Oman, UAE and Kuwait.  However, many migrants faced exploitations, abuse and sexual harassment in the hands of their employers. Some who were able to escape their masters’ houses ended up being derelict on the streets in Oman and Kuwait.  Other migrants with expired visas, managed to gather themselves and crammed into ramshackle apartments chancing their fate as illegal migrants. Without a Sierra Leone embassy in Oman, many Sierra Leoneans migrants in Oman faced looming uncertainty.

Fatmata Kargbo one of the Sierra Leonean migrants that faced manifold misery in Oman. She managed to complete high school and was determined to enter university. Fatmata dreamed of becoming a professional nurse, but her family could not afford to send her to university to pursue her dream, thus, she was left to fend for herself. At the age of 25 Fatmata decided to leave her hometown in Sierra Leone in 2019 for a new life in Oman. She was promised a well-paid job in a hotel for one year which would allow her to return to Sierra Leone and continue her studies. Therefore, she entrusted her life to a trafficker in the hope of reaching a country where she had little or no knowledge about. 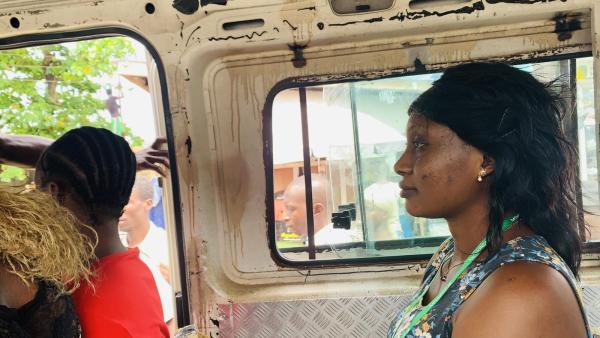 Fatmata whimsically decided to travel to Oman through what she heard from friends.  “I was cajoled by my friends’ vision of a successful new life in Oman’’ she explained. “My friends said that work is good in Oman and Kuwait and within a year or two, we can make enough money to buy lands and build houses back home” she said with a lopsided smile.  Young and ambitious Fatmata was determined and she sold almost everything she had and invested it in her journey.

Fatmata, like her friends, shared the similar dreams of a better life away from home. They courageously risked it all in chasing their dreams. Coming from Sierra Leone, a country which is ranked by the UN as one of the poorest countries in the world and with a high rate of unemployment, one can classify these young ladies’ reasons for chancing their fate in a foreign land as ‘genuinely ambitious.’  Many migrants from Sub-Saharan African shared similar dreams: to work, to earn money and to have a normal life.  Innocuously simple these migrants’ dreams seem to be, but tremendously onerous for many to realize. 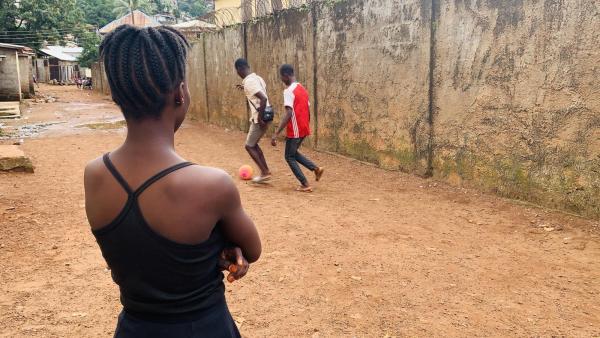 Fatmata was born in Bombali district in the Northern part of Sierra Leone. At the age of 5, she started living with her aunt in the capital city of Freetown. Her mother and father lived in the village with her siblings. Fatmata grew up liking sports. She became famous when she started playing football in her community. It was however unfortunate that this popularity did not live long due to her aunt’s discouragement. She discouraged Fatmata’s interest in playing football by calling it a ‘man’s game’. Instead, her domineering aunt taught her, after school hours, how to do and make business as a woman. She grew up understanding the art of buying, selling and making profit. She confessed that she was doing well with business before she set off for Oman. A bolt of nostalgia jolted her as she remembered her aunt whom she never said goodbye to before she journeyed to Oman.

Fatmata, like many other women from Sierra Leone who were recruited, got her first shock of disappointment when she landed at the airport and was received by deceptive agents in a sordid and slapdash welcome. Fatmata felt perturbed and disappointed when the agents informed her that she would be working as a domestic worker in a private home. She was told that she would not be allowed to refuse any work ordered for her to do. One could describe her job as a kind of slavery. Her arrogant master seized her documents preventing her from escaping the bondage. 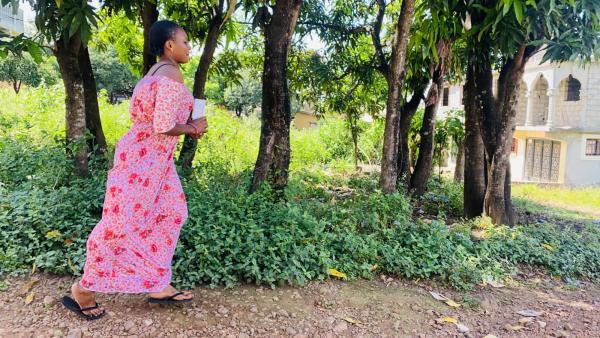 “My aunt was like a mother to me’’ she said. “She cared for me and taught me many things about life. She is the one who has the most influence in my life than every other member of my family” testified Fatmata.  She regrettably admitted that she deliberately failed to inform her aunt about her plans to travel to Oman. According to her, she was afraid that her aunt, who has the strongest influence on her, might have stopped her from taking the journey.

Fatmata, having been through the periphery of hell in Oman, described her two years experienced in the Arab nation as the worst in her entire life. She managed to escape the torture and exploitation in her employer’s home but ended up in deplorable condition on the streets of Muscat. “Life forced me to do some things beyond my will while living in the streets of Oman and till now I regretted it,” she said. Fatmata grimaced as she recounted her ordeals. Her pencil-thin eyebrows creased as she tried to stop the tears pricking at her eyes.  As life became more miserable and woebegone for Fatmata in Oman, a glimmer of hope came when she got in touched with a local subsidiary of a Sierra Leonean based NGO named Advocacy network against Irregular Migration (ANAIM). In February 2021, Fatmata finally managed to return home with the help of ANAIM.

Fatmata returned home heartbroken and disappointed. Her hopes of getting a job, save some money and return to Sierra Leone with the ambition to continue her studies failed to become reality. Her dreams of being a nurse has changed over the years, as she gloomily nodded her head while staring at the ceiling.  She sighed and shrugged her shoulders and in a timorous voice she stated.  “I don’t think I can manage to study again. My brain is not ready for that now” she said as she tried to stop herself from sniveling.   “Considering my time wasted in Oman, my age and the poor health of my father, I can only manage one thing at a time; unless I get a booster to start a new life.” She wiped the water welling up in her eyes with her sleeve. 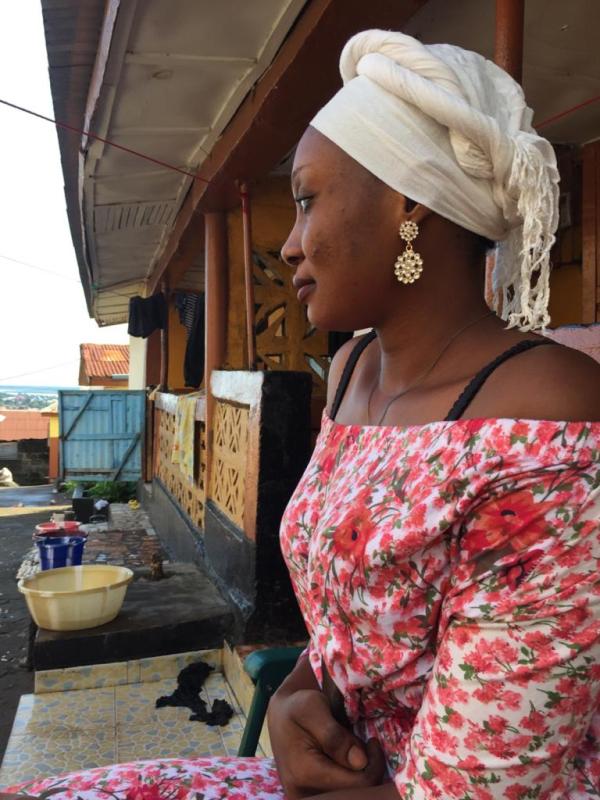 Amidst all the challenges she encountered in Oman, Fatmata is still determined to start a new life upon her return to Sierra Leone. Photo credit: Ibrahim Kargbo/ Abdul Kahrim Sankoh MaM Sierra Leone

Fatmata has been living on her own since she returned home. She temporarily put up in a one bedroom apartment at Rokel, a small town in the Western rural area of Freetown. Why is she living alone?  She unequivocally answered. “It’s not my wish to live alone” she said. “I would have loved to live with my aunt again in the city, but is not possible now. There is no space for me there anymore and by the way I’m 27 years old now.” Fatmata described her personality before travelling to Oman as one who loved to be around friends and other people. She was fondly called Fatima Bio, the name of the popular and stylish First Lady of Sierra Leone. Many things have fathomably changed about Fatmata’s character since she returned home.

“I don’t like to go out again like I used to, because whenever I go out, some people called me deportee and other funny names that make me feel bad” said Fatmata.  She paused for some seconds and sank herself a fraction of an inch deeper in her armchair before she continued, this time in a dull voice: “Ever since I returned home, I tend to hide myself from some people. Some expect that I should be rich by now after spending two years oversea.” This is a familiar situation faced by many returned migrants upon returning home, as if their ordeals weren’t enough, there is more at home waiting to unleash on them.

Amidst all the hard time and difficult experiences 27-year-old Fatmata faced in Oman, she seemed determined to start a new chapter of her life. She wiped the sweat beading on her forehead with her white head tie and shifted herself in her seat an inch higher then straightened her shoulders and blinking her glossy eyes like a celebrity ready for the camera. She gave that reassuring look that justified her nickname Fatima Bio. She compared herself to one of the bravest and most courageous animal; a lion. “Not the kind of lion in the menagerie,” she retorted. “I choose to be the one living in the free wild world. In Oman, I was like a scrapped animal in a cage, but now that I am at home, I want to heal and roam free again” she exclaimed. She managed to crack a smile and the earlier dark flush of disappointment in her cheek bone disappeared.