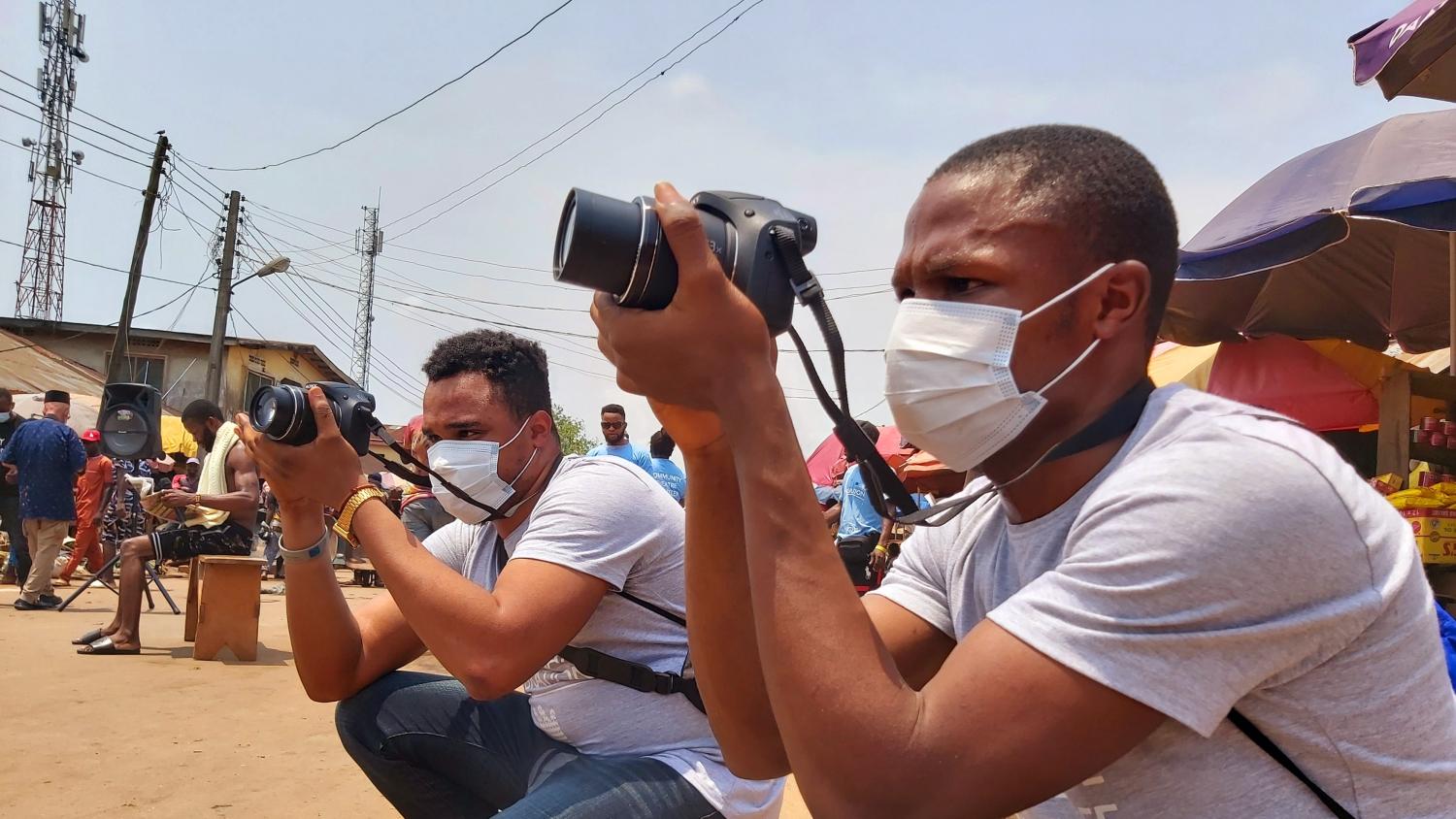 The person in the video is Mark Omozanbhie, a young actor with a passion for comedy and drama skits.

“Most people do not know that I use a smartphone to create my skits. They think I have a camera, a scriptwriter, an editor and so on. The truth is I do everything by myself,” he said.

Mark’s foray into comedy started while he was in Libya. He used to tell funny stories to entertain his friends and help everyone, including himself, forget the hardship they were going through. Even after he returned to Nigeria, his friends would still encourage him to perform as he was very good at making them laugh.

At first, Mark was unsure how to accomplish this because he found it difficult to stand in front of the public and did not feel like he had enough knowledge on how to create skits. After some time, he plucked up his courage and learned how to create short comedy sketches from watching tutorials on YouTube.

“I decided to make skits using my smartphone and people encouraged me through their comments on social media. This gave me courage to carry on,” Mark recounted.

Mark’s story was not always full of colour and laughter. He wanted to travel to Libya to improve his financial condition and that of his family. However, he was imprisoned for five months in a detention centre, and then spent nearly three years in Libya labouring in farms.

“I had a farm in my village in Edo state. I also had a barber shop. I felt that if I travelled to Europe, I could take my barbing career further. I experienced both death and life while in Libya. I was crying because of everything I encountered. I returned home because Libya was not a place for me to stay. I realizsed that there is nothing there and that Nigeria is much better. I didn’t know the journey was going to be like this otherwise I would have travelled the right way.”

A baseline survey conducted in 2019 revealed that the top two reasons for migration among young people in Oredo and Ikpoba Okha in Edo State, Nigeria were to find work or a better quality of life. More than 80 per cent of the respondents said they wanted to migrate to another country to seek work or education opportunities.1

After returning to Nigeria in June 2018, he became a Migrants as Messengers Volunteer, using his content creation skills to promote safe migration.

Migrants as Messengers (MaM) is implemented in seven countries in West Africa: Côte d’Ivoire, The Gambia, Guinea, Liberia, Nigeria, Senegal, and Sierra Leone. The project was launched in 2017 and supports a network of more than 300 Volunteers to create audio-visual content and organize local events geared towards promoting informed migration-elated decisions.

Mark was among the 40+ Volunteers in Nigeria who participated in photography and videography workshops, and learned how to conduct interviews, use social media, and share their stories of migration with others.

“MaM has helped me achieve many of my goals because I was able to learn more about how to record a video and produce skits. During market sensitizations, I have been able to practice public speaking and convey vital messages on the dangers of irregular migration. I also learnt how to identify fake news.”

Producing comedy skits has given Mark a glimmer of hope for his future. He believes that with consistency and dedication, he will become known in the comedy and entertainment industry like other popular Nigerian comedian and celebrities.

Mark says, “I hope and believe that if I continue this skit, I will see myself becoming my own boss. In ten years’, time, I see myself bigger than AY, Broda Shaggi, Tunde Ednut and bigger than most comedians today. I see myself growing bigger and I see myself doing skits and employing people to act in my skits.”

Despite his struggle to afford a good quality camera, pay for actors or a good location for his productions, the aspiring comedian stays motivated thanks to the positive feedback from his fans and the support from his friends.

“My happiest moment is when people I don’t know recognize me on the street. Even when I shoot skits, the way people gather and watch or ask for my contact details makes me happy. Some of my fans even tell me that they would like their son to act or produce skits. I know I am going somewhere. I will not give up and continue until I get there.”

“My message to young people is not to give up on life. Nothing good comes easy. All the popular musicians and celebrities did not start from the top but from the bottom. They did not just become millionaires or billionaires in one day. Young people should put more effort, energy, and focus. When they focus, they will get it. Sometimes I lose hope when actors in my skits let me down or ask for money I do not have. However hard it is, I never give up.”

Mark’s work can be found here: